There Is No Point to Envying the Young or the Old

Especially for the benefit of young people, how can I make the shortness of your life vivid enough for you to be properly warned?

It all goes by so fast.

Today, I turn 45 years old, and I have reached what will probably be the halfway point of my life. My grandmothers both lived to their late 90s, but I think 90 flat is probably my best outcome. The last 20 years of that, let's face it, I'll get limited use out of most of myself.

And my life so far has been so short it stuns me. Takes my breath away. I am still a child. OK, yoga helps with that. But there's also a negative aspect to being young at heart... my memories of being young are still so fresh, I could wake up and be told I have to go to high school tomorrow and I don't think I would miss a beat. You only begin to enjoy the song, and suddenly the record's almost over. And a man in a black cape with no skin is going to smash your record the minute it ends.

Some days seem very long. Some waits seem very long. They are not. I have so very many memories, bizarre and sad and beautiful and everything else. But they all took place in a single instant. They can all be put on a microchip the size of a bedbug.

So don't envy the young. If anything, smirk at them, but not too vigorously; they'll know what you know, very soon.

Welp, I'm fucked. But you, dear reader, profit! LYFE to release this week.

So last week, I was in the middle of prepping my first thriller, THE SEINE VENDETTA, for publication.

I didn't aim to be a thriller writer. But writers without trust funds have to go where the money is. My first love was sci-fi, but alas, I fell for her in a better age. I've been sitting on a sci-fi epic named LYFE for the better part of a decade. After years of sending out copy after copy after revision after revision of the manuscript— and being told by agents and publishers that my premise isn't sexy or marketable enough—I got an offer to write a thriller for money, up front, for the action genre press STORM RHINO.

I decided to throw myself into action writing. I had to finally accept the fact that sci-fi in the 21st century is the sole province of ideologues (most of them left-wing, although there's an almost equally hidebound little Christian cabal fist-shaking at them in a corner). As my own ironically fixed tendency is to be wary of and repulsed by ideology, I told myself that, yeah, this isn't the genre for me... and maybe they're right anyway; maybe my ideas in sci-fi really are unmarketable. I figured I might as well switch to a genre that valued my work. IN DOLLARS.

But I came up with a plan to recoup LYFE anyway: I decided I'll let Storm Rhino publish my thriller novella, get a little buzz, see how that short format works for me, and then divide LYFE up into a series called ELEKTRA'S REVENGE and self-publish it as a series of novellas as well, catering to the short attention span of everyone these d...

WELL, GUESS WHAT? It was last week I made that decision. Not seven days ago. I had barely processed the thought and begun to make plans as to where to divide the books when I discovered, that despite the TOTAL UNMARKETABILITY of my premise, Netflix has come out with a series USING MY PREMISE.

This is the basic framework of both LYFE and Carbon Whatever-It's-Fucking-Called: a future society is inflexibly lorded over by immortals, who live and rule forever while the underclass dies. And then the worm turns.

UNMARKETABLE, EH? NOT A SEXY PREMISE, HUH? WHAT'S IT DOING IN A MAJOR SERIES, THEN? It seems that via magic, if you choose the right parents or cronies, any premise suddenly becomes marketable. I really need to go back in time and climb into a different vagina-hole. Or pick friends that don't all die young.

Well, if this show is a hit, it will definitely demonstrate that the publishing industry is a meritocracy and all of those agents and editors were correct to publish stories about transexual dinosaurs instead, so that's something. Silver linings!

Now, I'm not saying that Netflix found out a way to send mind reading rays through my tinfoil hat to steal my ideas. I'm just hinting at it strongly. I've read that this "prestige series," although created from an unmarketable premise that no one would ever want to read or hear about, was  based on a novel that was published in 2002. Which we ALL know cannot be true, as there WERE NO NOVELS IN 2002! Everything worth having was invented after the Smartphone. Gawd, how dumb do these people think we are? (I don't know how close the details are to my books, because I'm too heartbroken to actually watch their goddamn series.)

All I know is that in order to avoid appearing to be derivative of this crap series, I have to publish my book THIS WEEK, before the flood of ACTUAL  derivative works and rip-offs and fanfic begins to appear.

So watch for it in the next few days. ELEKTRA'S REVENGE, BOOK ONE: LYFE.

Not that it's going to help much, as my work will be buried in the usual piles of garbage that come out every five seconds on Amazon.

This is just another of the too-awful-to-be-a-coincidence disasters that have befallen me as a writer. The last one was far more macabre. Let's call it the Tale of Dead Bert. My friend Jamie Mason, the Canadian novelist, and I, wrote a pilot script for a sitcom. (You think I'm going to tell you the premise? Fucking think again!)

The script was hilarious, as Jamie's old friend, who was a Hollywood producer, assured us. The only way you can make a TV show is to know somebody, so his enthusiasm for the script was like manna from heaven. He agreed to make plans to produce it, and we were as excited as you may imagine. As we moved ahead, however, Bert's communications suddenly grew sparse. Never negative, just... sparse. Then they trailed off. We were pissed as hell and very insulted and disappointed... and then we felt ashamed of ourselves when we found out why Dead Bert, as we now call him, had gone dark.

Dead Bert, as you may have guessed by now, was dead. He had thought his cancer was in remission. However, the moment he decided to give us a chance, the gods decided to strike him down.

So, if you want to be part of a real-life thriller ("Cult author ripped off by evil gods and scriptwriting bots, but saved by grassroots publicity machine!"), please share this fucking post. Book to appear roughly round the weekend. Here's an excerpt that is TOTALLY UNMARKETABLE—totally unmarketable except for you, my loyal readers, with your amazing taste and brilliance:


“Dirty!” he croaked. “Rotten!” he elaborated, and then fell into a pile. He lay still for a moment, then poked his head up, looked around him suspiciously, and ran offstage. The crowd tittered with appreciative laughter; they had heard Bartleby Burgundy was going to have a spectacular showing tonight, but they didn’t realize it would be such an important role as Falstaff.

Hey there, blog reader. If you're wondering why I haven't posted anything since back in 2015, indeed I have: I'm now blogging at annsterzinger.com.

Same bad attitude, just a more grown-up name. Because eventually you need a blog that doesn't have bad words in the title. Unless you think my name is a bad word. I guess there are a couple of trolls that do, but my parole officer says I should consider that a form of flattery.
Posted by Ann Sterzinger at 4/02/2016 05:37:00 PM No comments: Links to this post

The Maw Gets Another One: Julie Lindemann

Someone I admired died today. 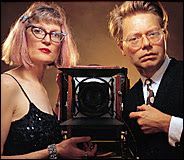 Julie Lindemann first saw me when I was puking off the porch of the punk rock house I lived in when I was 21 (I wasn't aware of her presence till a few bleary moments later). That is the age of hangovers, which explains the puking. She was a grown-up punk rock girl, still cool as hell; she was actually IMPRESSED that I was vomiting off the porch, and she was roughly as old as I am now. She had a timeless punkness that she never lost, even when she had admitted she was going to lose to the rebel cells.

I met her thus, in the filthy confines of my own home, because she and her mate Johnnie Shimon were coming to visit my roommates, Nigel and Brett. Nigel and Brett (Brett is now deceased as well) were two punk rock reprobates from Manitowoc, where Julie and Johnnie had been living and working their photographic magic for, I dunno, decades.

Their life's work was taking portraits of the lovely whack-jobs of my home state of Wisconsin:

The portraits as well as most of the subjects were legendary in their off-the-beaten-path eccentricity and hard-core dignity. I went to their last photo exhibit during Julie's lifetime this spring, at the Museum of Wisconsin Art. Thank god I didn't miss it (thanks to Vee Sonnets, who drove); the couple were unable to attend because Julie was in too much pain, but I saw an artwork there for whose conception I suppose I had been present:

The last time I saw them, they had come to visit me in Carbondale, where we went to see the ruins of Buckminster Fuller's own...

... I had no idea at the time it would be the last I would see of her. So appreciate every moment with people. You never know. I never went to see them enough. I was busy, I was lazy, I was an ass.

Anyway, at the Museum of Wisconsin art I saw one of Julie and Johnnie's photos of a leafy canopy, repeating as panels of a geodesic dome hoisted near the ceiling... 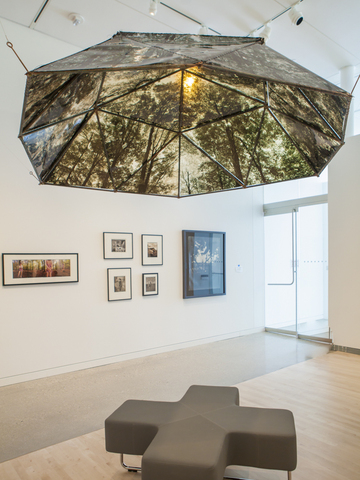 That's how I said goodbye.

My personal brand is:

NOBODY EVER WINS A MIRROR GAME

(COUGH) HERE'S MY OTHER BLOG. Where I sell books. And mirrors.
REVIEWS OF BOOKS that I've written or published.

With friends like him, who needs the rest of you?

My first novel with cover art by Frankie O'Malley

NOW AVAILABLE AS AN EBOOK! Murder your way into the 21st Century with style. Chicago style. Which is usually covered with mustard stains.